A two-day drop in the U.S. dollar, driven by hopes of a slowdown in the Federal Reserve's rate hike campaign this year, lifted sprits on Wall Street last week. The PowerShares U.S. Dollar Bullish Fund (UUP) fell back to levels not seen since the middle of October, driven by the weakest non-manufacturing activity survey since February 2014.

That boosted some of the most beaten-down areas of the stock market, including materials stocks and precious metals. On Thursday alone, investors enjoyed a 18 percent gain in Freeport-McMoRan (FCX), a 10.1 percent gain in Alcoa (AA) and a 4.3 percent rise in Caterpillar (CAT). Admittedly, some of those gains were reversed on Friday on a further fall in the unemployment rate.

Related: 3 Money Moves to Make When Stocks Are Sinking​

While a weak dollar is seen as a bad thing from a patriotic standpoint (as a reflection of American strength) and consumers’ perspective (it increases import prices), this is good news for stocks for two big reasons. Long story short: It's time to pray the dollar moves lower. 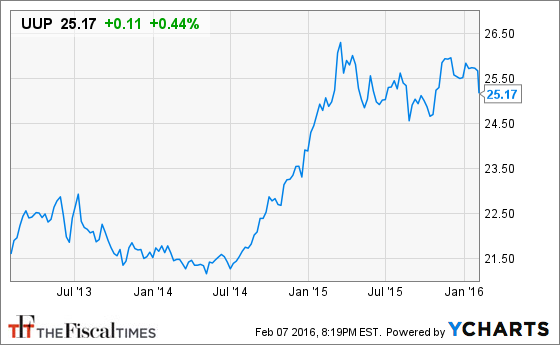 For one thing, the dollar's weakness is helping to stabilize commodity prices in general, with precious metals the main beneficiaries. If the dollar's decline can continue, crude oil will eventually get a lift since the dollar is the currency of choice in global trade.

To be sure, the oil market needs all the help it can get with Russia and OPEC suppliers unable to come to an agreement on a supply cut, U.S. crude oil inventories above 500 million barrels for the first time ever and U.S. shale production only now starting to decline.

Related: 5 Conspiracy Theories About the Oil Crash, from Ludicrous to Logical​​

Second, a weaker dollar would go a long way toward alleviating the pressure on corporate earnings. The strong dollar drags on foreign earnings, and the resulting commodity price weakness has also been fingered as a big reason why 4Q15 earnings growth has been so disappointing.

In fact, according to Jason Goepfert at SentimenTrader, companies reporting results are blaming the dollar for weaker-than-expected results on a scale not seen since the dollar was peaking back in 2001. Shortly after, the dollar ended a seven-year downtrend.

Whether or not the dollar actually continues its recent weakness and sets all the positive dynamics outlined above into motion depends on both the flow of economic data and Fed Chair Janet Yellen's semiannual monetary policy report before the House Financial Services Committee on Wednesday.

Related: The Fed’s Dilemma — Is the Economy Slowing or Surging?

The data support a dovish stance by Yellen: The chart below shows that the Citigroup Economic Surprise index has fallen back to late 2014 lows, down sharply from the highs seen late last year, when the Fed decided to raise interest rates for the first time since 2006. Clearly, the situation has changed. And that means the Fed's previous forecast for four quarter-point rates in 2016 no longer holds. Paul Ashworth, chief U.S. economist at Capital Economics, believes the Fed won't raise rates until June at the earliest and even that timing depends on a quieting of fears about a collapse in China and a U.S. economic slowdown as well as a leveling off of commodity prices.

We cannot discount the rising possibility we won't see any rate hikes at all this year as Yellen awaits confirmation that wages, inflation and energy prices are going to stabilize. The realization that this may be the case should help reverse some of the 18-plus percent gain the dollar has posted since the summer of 2014 and boost commodities and mining and materials stocks in a big way.